Follow Hungarian-American writer Anthony Trendl on Facebook.
​Buy or borrow (free if part of Kindle Unlimited) these books on Kindle.

Mr. Smith and His Delicious Ice Cream: A Bluster County Tale
Kindle
"But no name has ever equaled the odd name of Triplebippleabbledabblekadupledop Smith..."

My Biggest Game: A Baseball Story: A Bluster County Tale
Kindle
"Bowing low, he gave a last confident nod toward home plate, the kind that said, 'You know kid, I'm Danny Dragoon. I pitch fire, and you can't hit fire. No one can.'"

A scrawny fourth grader goes to bat against Danny Dragoon, the best pitcher in all of Bluster County. No one expects him to get a hit, but by accident, he does. Suddenly, the attention is on him, not Danny. A tale of sportsmanship.

Escape from Hicklebirkle Manor: A Bluster County Tale
Kindle
"Chucky, the once ever-gracious gray Persian cat, had sinned. He had broken the commandment of the house. All who lived within it must abide it. There was only one commandment: the Declaration of Solidarity, and that was this, 'Thou shalt live as if every life is your own.'"

Chucky the Cat, rat couple Edgar and Veronica, and Mason the Turtle all live happily until Old Man dies. When Chucky the Cat eats Veronica, trouble begins. Can they escape the house where they are trapped?

The Boy Who Hated Doing Everything: A Bluster County Tale
Kindle
"Jeremy Jeppers hated doing everything. That is, almost everything. He loved to dream about great adventures fighting house-sized dragons, navigating the darkest forests, and flying into thunderstorms with his jet. No matter how harrowing the challenge, Jeremy was always the hero."

Jeremy Jeppers is a boy loves to dream about adventure, but is lazy. What happens when adventure after adventure shows up at his house? This warm tale has everything: baseball players, firemen, a cat named Tuna Salad, dragons, a plumber, a postman and an inflatable boat. 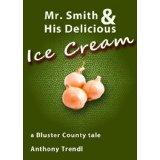 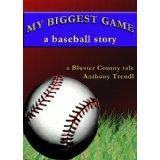 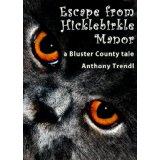 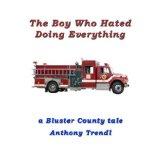 How Wind Began: The Story of Pepper Jack: A Bluster County Tale
Kindle
"His name was Pepper Jack. Or, that what's we called him. OK, no one really did, but we should have. It would have been a cool name for a guy, and a pretty accurate one to boot."

When an unusual young man, and a very common seed get together, a tornado nearly happens. Find out how Jack did (or didn't) get his nickname, and which is the left side of a pepper. Jack Canelo is having a big party and has to grind a lot of pepper. Three pounds! Can he handle the job? Pure silliness. 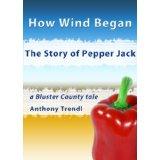